Rules theory, how to trigger them

ELP is a kind of a tool box. It provides a lot of functions, and only the barcode (industry standard method) and the ELP_Command search in the print file itself are turned on by default. All the other functions need to be activated.

The goal of setting up rules is to apply any functionality ELP offers, without even the need to change the data stream.

Every task/rule has to be located in a section. The section names can be freely defined up to 512 characters. You can write as many explanations in the section name as possible. Be aware that there are some predefined section names! 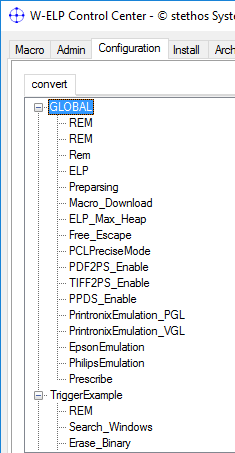 ELP offers these options to perform any rules, listed in the appearance flow through the ELP process:

Note: Some of the functions are limited to the Windows environment. Please see below

Direct after the start of the ELP Software (Windows: Automatically from the job arriving in the print queue , Other by Command Line call ), the software tries to read the content of the provided IniFile, which is supposed to hold all instruction on what to do. Starting with version 7 the file can also be part of the data stream, but this possibility is more for programmers, see further below chapter 3.

1. Right at the beginning of the process, before even the first byte of the data stream is read

Depending upon the platform ELP does automatically check for specific rule names in the ini file and if found, apply the keys listed in the section. 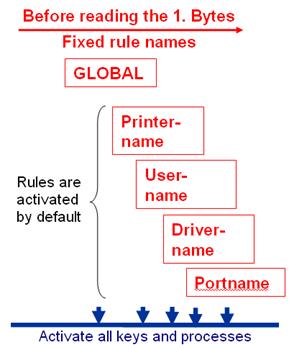 Hint: With the key TriggerSection could you analyze already variables, which had been set even before the first byte was read.

; Tell windows that the trigger isFound is already found

; Evaluate the variable #PRINTDOCNAME# before one byte was read

TriggerSection=Check if Job comes from MSWORD

[Check if Job comes from MSWORD]

; Is the job coming from MS word

You may use in any automatic processed as well as in any other activated section the ELP key IniFile. This function does stop the analyzation of the actual loaded convert.ini and loads the new named one. The following effects then apply:

The keys iniFile, Search_ and Trigger_ do not really make sense in the rule GLOBAL.

2. Then any external software can be called and return any rule / variable for further rule evaluation

If the key CallAtStartup is defined in any default startup rule, the external software named in that key is now processed.
Here the ELP example for JobTicketing, which can be activated in Rule assistant and performs up to 8 user defiable ELP rule settings. 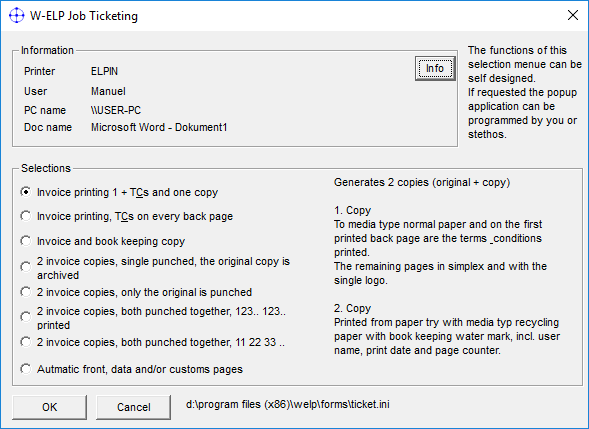 ELP is shipped with a Job Ticketing and with an Accounting example. The picture above displays the Ticketing solution. The up to 8 selectable tickets can be defined in an external ini file, using standard rule keys.

The selected information is returned as described in the next described process step.

Note: If a user needs to make an interaction, ELP must be installed on the user PC, or he must have access rights to the server console.

3. A rule set (ini file) can also be set in front of the print job.

Starting with Version 7 (not in I-ELP), the ini-file can also be part of the data stream itself and must be located at the beginning. The definition starts with the ini-file and ends with an UEL in a new line, usually followed by @PJL ENTER LANGUAGE=PCL.

This method is used mainly in conjunction with the CallAtStartUp key. But any other command set or variables and can be processes back or simply defined.

The maximum length of the total ELP ini file in a data stream is 64K Bytes!

4. Searching in the incoming data stream for information and change or apply rules on them

In addition for ASCII or close to Ascii data streams, Search_RowNo is able to read information form a specific page, row and column position and with a certain maximum length.

The differences among Search_Binary, Search_Windows. Search_Text, Search_Windows_New. Search_Text_New are explained in the Admin manual or briefly here. But the differences are not really needed to be known, as the ELP Control Center offers during the rule definition the possibility to run the searched information against the previously captured data stream. Then the best method is used.

The Search methods: Binary, Windows and Text (not NEW!) can in addition modify the search stuff, or insert/add something or erase it as well.

All methods can read back information from the stream, which are located behind the searched text. If you have this in your data stream. Invoice Number:4711, then you can read the number into an ELP variable when you search for: Invoice Number:

It is not relevant; where the searched rule/section is located in the ini file. When the text or data is found while reading the data stream byte by byte, the section is activated. You may even have several search statements in one rule. Anyone found will trigger the rule.

There are special keys available that an item is only searched one, or that all search statements are for the rest of the stream ignored.

If.. then ... else constructions can be applied as well.

5. After the stream is passed into ELP, the so-called trigger rules are analyzed

The second last possibility to apply rules to the ELP printing system, is using the Trigger methods. In order to use that method the ELP=ON key must be present. The difference to search is, that all rules/sections with Trigger_ evaluation keys are examined after the complete data stream was read. There for the Erase, Add etc. commands can't be used.

Due to memory restrictions, for HP /Ricoh firmware this evaluation starts for the internal version after about 1.5 Megabyte reading and using the AP-ELP box versions, maximum at 50 MByte.

Comparing to the search method, for Trigger rules it matters, if they are at the beginning or end of the ini file. The ELP process does analyze them from top to end.

Several Trigger_.. keys in one section are combined by an AND operation. So all triggers in a section need to be evaluated as TRUE, then the section is executed. In order to verify the so-called secondary triggers, all provided primary triggers need to be fully filled (TRUE)

ELP Control Center offers during the rules definition the possibility to run the triggered information against the previously captured data stream. Then the best method is used.

6. The data stream is searched for valid ELP_Commands

This is a quite historic function in ELP, developed even before the age of ini files. Any ELP_Command can be defined direct in the data stream, surrounded by default with the << and >> characters. For Example: <<F1000;>> in the data stream will [re]define dynamically the first print page as form 1000.mac.

7. Finally while writing the processed data stream out, additional searches on the stream can be performed with limited actions.

Those keys can for example be used in conjunction with splitting the data stream into X archived print files, using an archive file name based upon a value found in the data stream, like an invoice number.

If.. then ... else constructions can be applied as well.

8. At every FormFeed and at the end of the job process any external software can be called

Special Call keys can be used to call any external software and if needed, read back and insert additional data streams.

Example: If on the front page of a document an special machine is offered, ELP can automatically insert on the back its specification data sheet. Or special customs information collected and inserted right after the last page of the invoice.

In all activated sections special keys can be used to gather additional information / variables from:

At the beginning of each ELP processing of the data stream, the ELP software voter does check the print file for a known printer language.PCL5 based data streams are fully processed by ELP, others like Postscript or PCL6 (PCL-XL) can partly be processed. Once ELP did detect one of the known and left hand named print data stream languages, the configuration file, most likely the convert.ini, will be checked for the corresponding section name.Once the section exists, the keys inside are evaluated. So for example it is possible to store such streams at special locations, or to CallNow a special external command set.

Once the section exists, the keys inside are evaluated. So for example it is possible to store such streams at special locations, or to CallNow a special external command set.

The ELP ini file is build upon the same syntax as any windows ini file. The different components are:

; This is for documentation

; With hex characters, which will be converted to the single sign

For Windows systems, the startup convert.ini is set in the expert mode of the Admin Tab. Usually the file is located at c:\ProgramData\WELP\convert.ini. In the same directory you find a file convert.ori, which is a copy of the original installed file.

For all the other software installations the file needs to be passed in using the ELP Command Line Arguments, See here: X-ELP and Linux / Unix / AIX / Solaris etc.

We use cookies on our website. Some of them are essential for the operation of the site, while others help us to improve this site and the user experience (tracking cookies). You can decide for yourself whether you want to allow cookies or not. Please note that if you reject them, you may not be able to use all the functionalities of the site.